~ Those who have expressed an interest in assisting the board in a larger volunteer roll will be contacted and we will have a meeting in early February.

~ after 6 years of waiting we oﬃcially have a trailer for transporting interments, props & uniforms to and from away games and competitions

~ Those who have expressed an interest in helping with the build out of the trailer will be contacted and a meeting time set up with Scott & Erick to discuss their wants and needs for the build out.

From the Band Directors

~ Has been received really well by students and players, 2 more games with the Pep band on 2/1 &

~ Clinics and auditions for Competition Band will be May 2, 4, 9 & 11 – extra clinic dates will allow students the practice time to audition well

~ Drumline and Color Guard will have clinics & audition dates TBD

~ Football band will travel to away games and perform a fun, choreographed show at halftime, 4-5 minutes long

~ Competition Band will also be a part of the Football Band

~ Competition Band will perform their show after each home football game

~ A calendar for January 2019 through November 2019 was given out. Some minor changes may be needed but most major dates & times are now available

~The Symphonic Band WILL play at Graduation on May 25th

~ October 11th – Home game during Fall Break, the band WILL be playing & performing – plan on being there

~ BOA Trip – many details TBD, current quote is $300-$350 but it is anticipated to be lower once itinerary is finalized

~ some fees from the 2017-2018 school year are still outstanding. Please take a look at your balance and pay in full or take advantage of fundraising opportunities to take care of the outstanding

balance. We get no funding from WCS – band fees pay for instructors, buses, needed upgrades to equipment, competition fees. We can’t do all we want to if we aren’t fully funded.

~Next major fundraiser (to replace WOTS) is the Spring Home, Lawn & Garden Fair on Saturday, April 6th. Set up on Friday April 5th – will need lots of help setting up the gym, getting sponsors, concessions, ticket takers, etc.

~ Will combine Spring Fair with a Mulch fundraiser

~ Scrips is a fantastic way to pay toward band fees. We will oﬀer more ‘tutorials’ to help get you started

~ Flag subscriptions – check for renewals, if you sell any you are committing to help for at least 2 installs. Can only sell in Summit zone, do not recruit from Indy or SHHS.

This entry was posted in SpartanBand.

Order a US Flag Subscription

Do you want to order a US Flag subscription? Use this google doc link to place your order today! 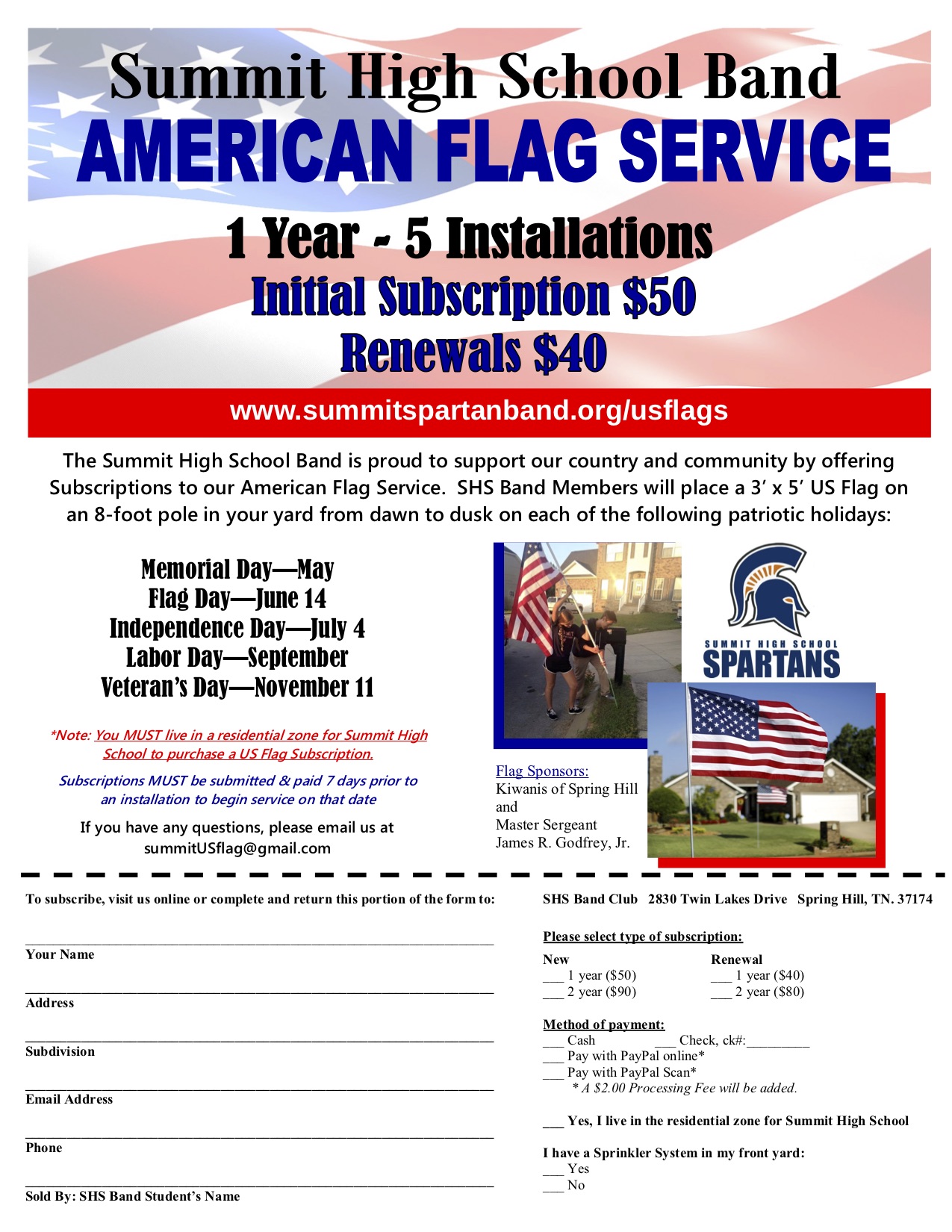 .
Thank you for supporting the band with this patriotic fundraiser.